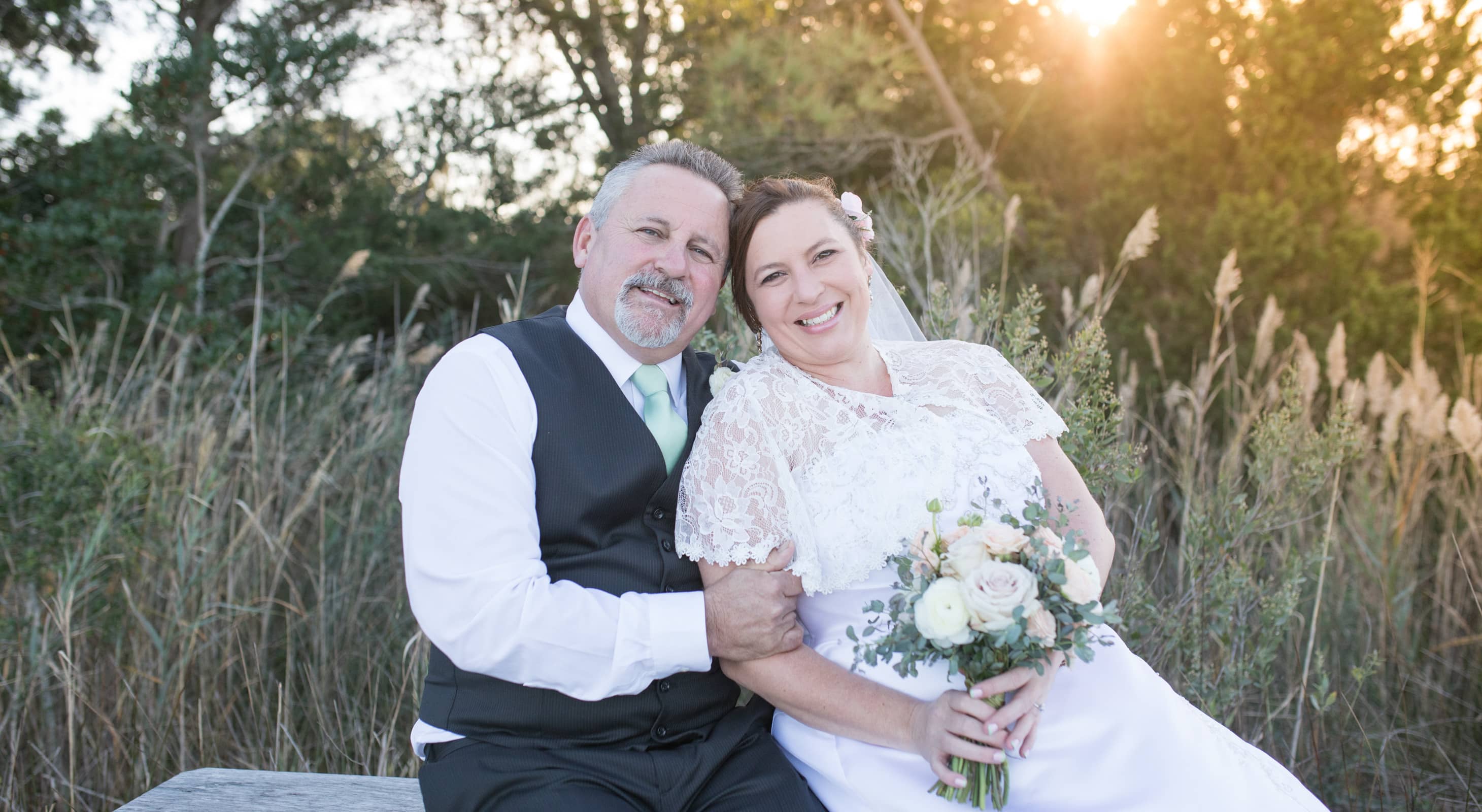 Roanoke Island is one of the best known and most loved coastal villages along the Outer Banks of North Carolina. Surrounded by the tranquil waters of the Croatan and Pamlico Sounds, the quaint waterfront village of Manteo is tucked in snugly along the shoreline of Shallowbag Bay. The friendliness of the people, the unique coastal architecture, and the fresh seacoast cuisine will add a sunny and carefree atmosphere to an already special day. It is a setting that captures the hearts of its visitors.

With over 25 years of experience at the White Doe Inn, we will completely remove the stress out of your wedding planning and coordinate all aspects of the days special event. The splendid views, the superb food, and the goodness of people as they strive to make this a special time for the newlyweds and their guests, will exceed all expectations. 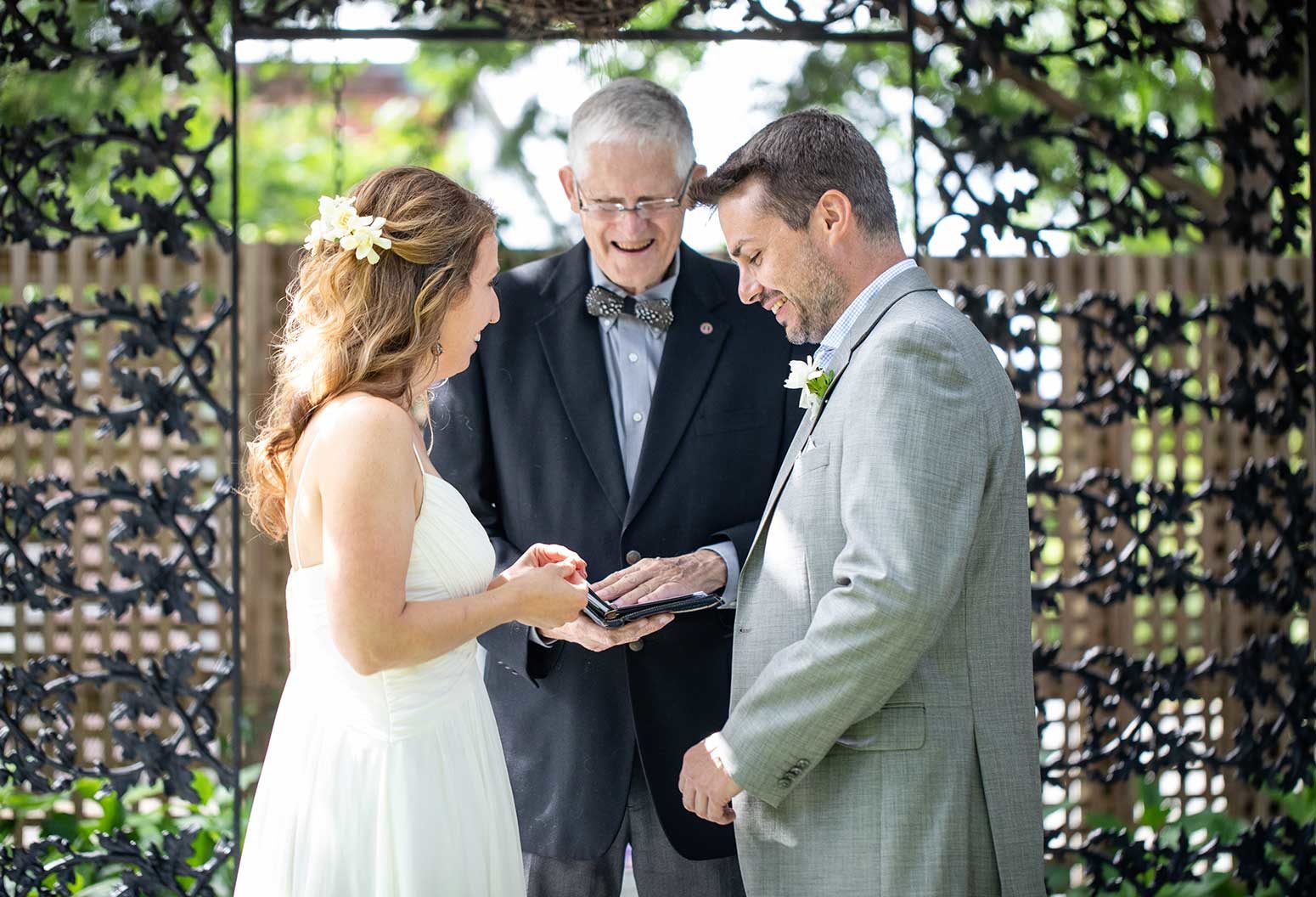 If you dream of a romantic setting where time stands still and graciousness is a way of life, our Outer Banks wedding venue is the perfect place for your intimate wedding. As professional wedding planners with a passion for making dreams come true, we have helped hundreds of couples to create the perfect wedding or Outer Banks elopement. We take great pride in our professionalism and our dedication to personal service.

Gather together with friends and family to share this special event.  Enjoy the camaraderie, the joy, and the fellowship with those that have played a significant role in your life.  From this point on there will be two of you that will be sharing these special moments in life. Package is based on Ceremony for Wedding with 30 guests. This package requires renting the entire inn including the nine rooms and is not included in the package price.

*Taxes and gratuities are not included in package pricing

Enjoy a beautiful ceremony in your choice of the Inn’s lush gardens or one of our nearby beaches. Return to the Inn to celebrate your union with a dinner reception in the gardens. The package is based on Ceremony for Wedding Couple plus 20 guests. More guests may be added for an additional fee ($50 per guest). This package requires renting the entire inn including the nine rooms and is not included in the package price.

*Taxes and gratuities are not included in package pricing

A private elegant celebration for just two or include your closest family and friends. The package is based on Ceremony for Wedding Couple and 10 guests. Additional guests may be added for an additional fee. A two-night minimum stay is required and not included in the package price.

* Taxes and gratuities are not included in package pricing 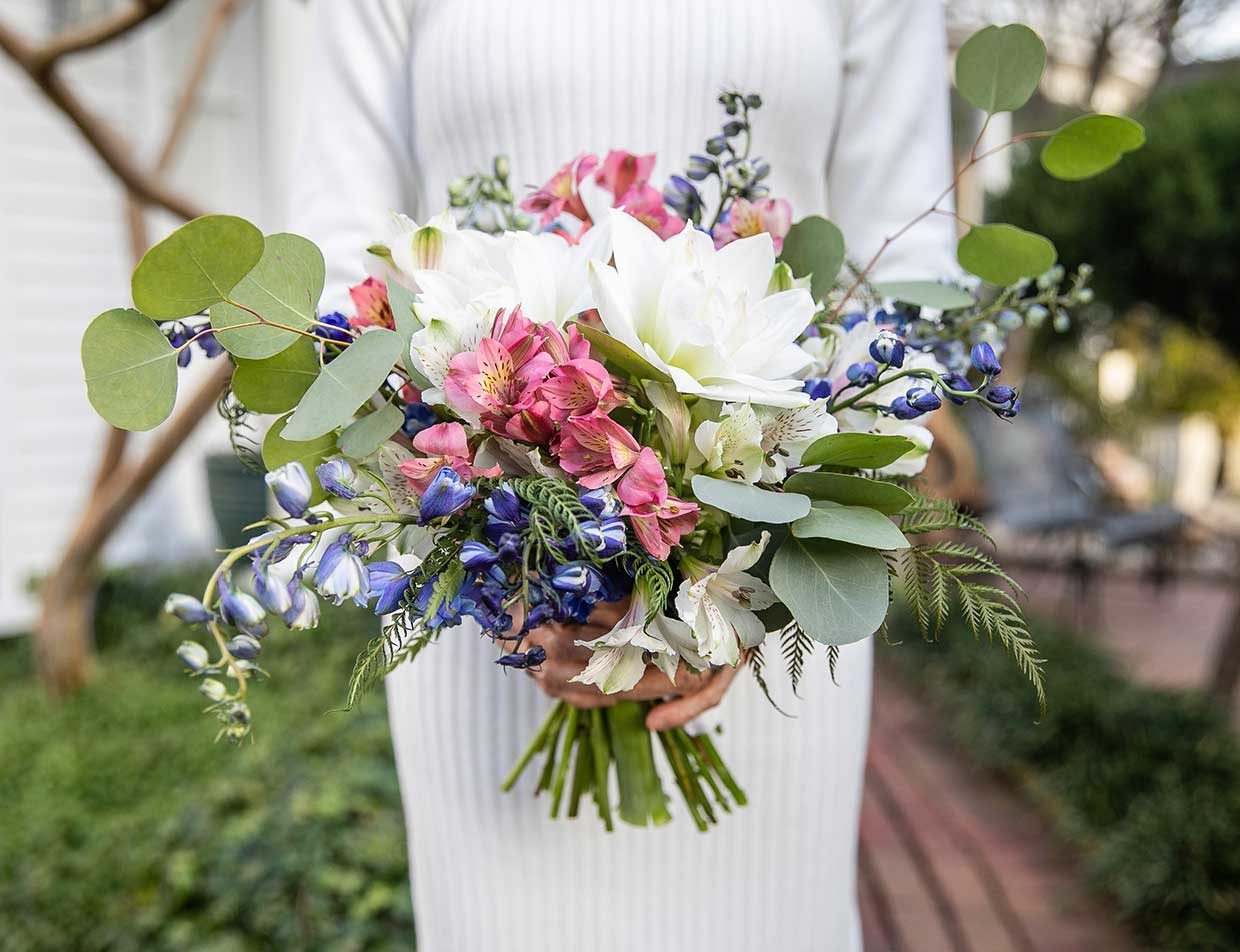 Make the Day Your Own 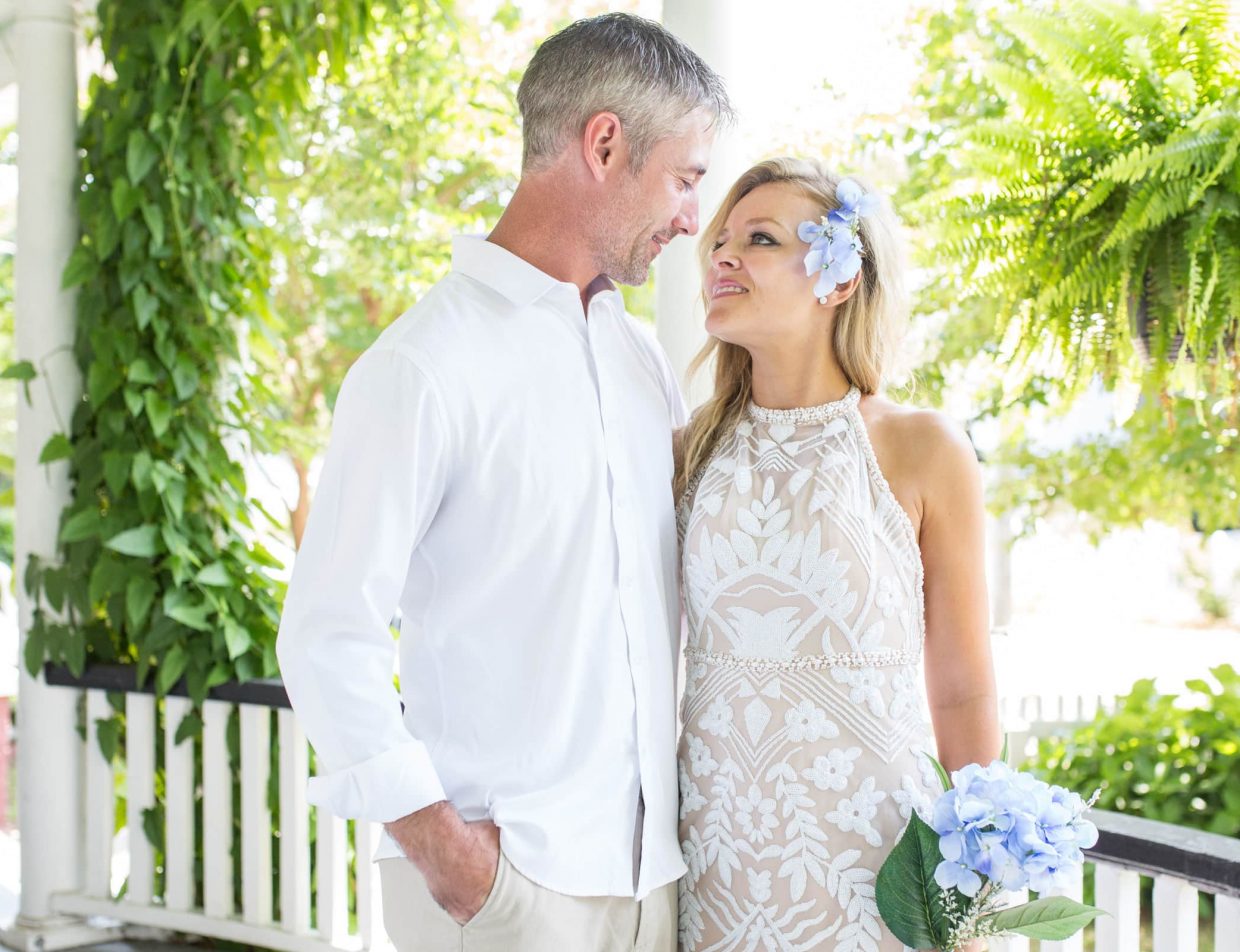 If you prefer to have a more intimate ceremony, for either just the wedding couple, or up to eight guests, then our Elopement and Vow Renewal Packages may be more fitting. Plan your ideal elopement on the Outer Banks, where you’ll be able to focus on what it most important – the two of you!

We Can Perform the Service

Robert (Bob) Woody became an ordained non-denominational wedding officiant in 2001 after retiring from his career as a National Park Ranger. He and his wife of 30 years, Bebe, are now proprietors of the White Doe Inn in North Carolina, which hosts many small weddings. Bob performs wedding and vow renewal ceremonies at the White Doe Inn, Manteo waterfront, and Nags Head beaches..

Bob’s ceremonies are Christian inter-denominational in their approach. The service is flexible, with a basic ceremonial order which can be structured by the wedding couple, including writing their own vows or making the ceremony more spiritual. Additional ceremonial components may be added, including Unity Candle, Wine, Rose, Sand, and Family Union rituals, as well as participation by family and friends through readings and song.

The Order of Ceremony is usually based on the following: 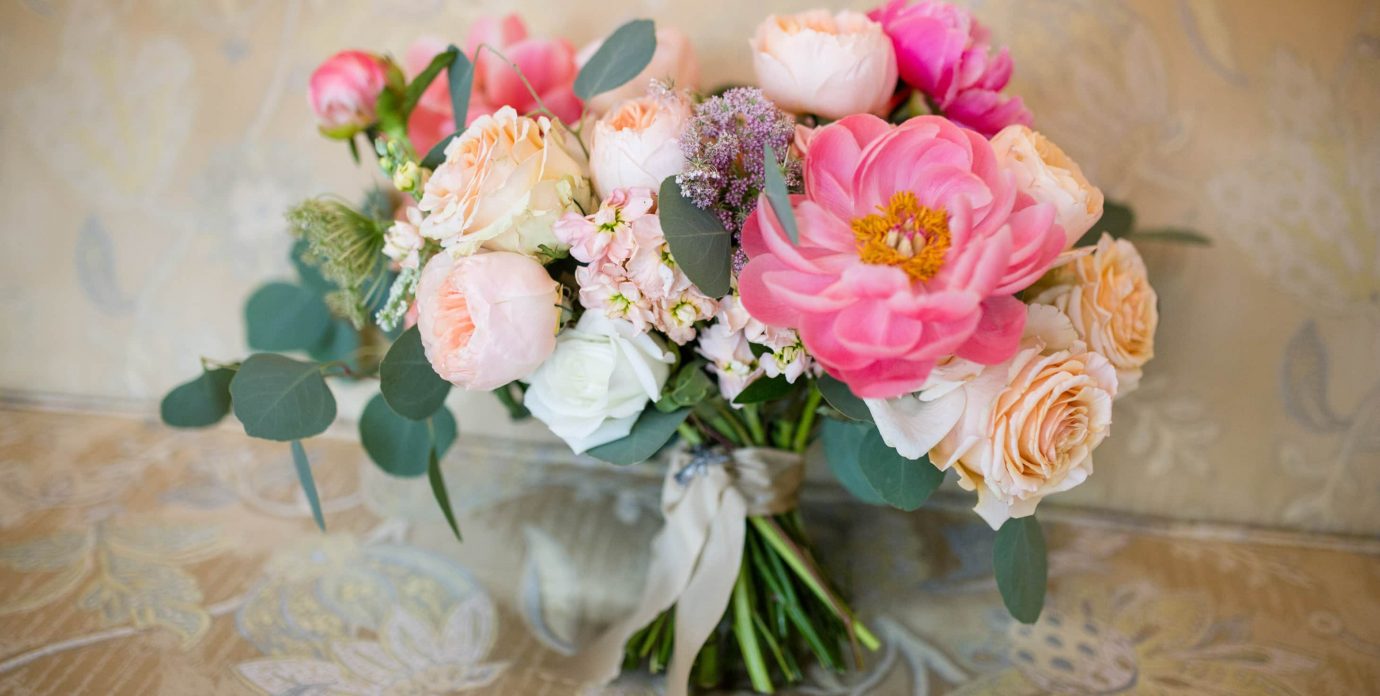 Weddings Are Poetry in Motion

It is our desire at the White Doe Inn to help you write the verses that will become your poem on the day of your wedding.

Book direct with us and enjoy the peace of mind that you’re getting the safest possible stay.